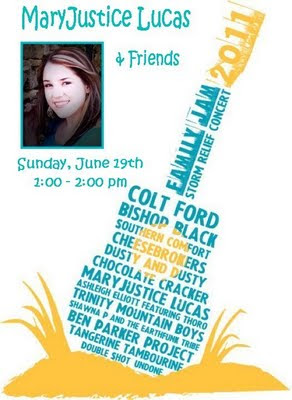 On April 27, 2011, tornadoes ripped through large areas of Alabama leaving large paths of destruction and people without homes in Northern Alabama and the Tennessee Valley. Neighbors have joined hands to raise money to benefit those left homeless or with extensive damage to their homes. Many were uninsured. Would you come and join us to help raise money for this worthy cause?

The Family Jam 2011 promises to be a fun-filled week-end. It is being held in conjunction with the Bassmaster Elite Series which is wrapping up its 2011 season on Wheeler Lake with its Dixie Duel competition June 16th-19th. The Family Jam Music Fest offers two days of ongoing live entertainment, children’s activities and games, and topped off with a spectacular fireworks show.

There is no charge for this event, but donations will be accepted throughout the week-end. MaryJustice will be joined by songwriter friends, Matt Morrow and Andrew Velez on Sunday, June 19 from 1:00 - 2:00 p.m.
at 11:17 PM