Appearing live at the historic BBQ Caboose in Lynchburg, Tennessee, home of the Jack Daniels Distillery. Come and join MaryJustice Lucas, Jerry Mungle and Earl Watts as they perform on the "Old Time Country Radio Show" hosted by Paul Jones. 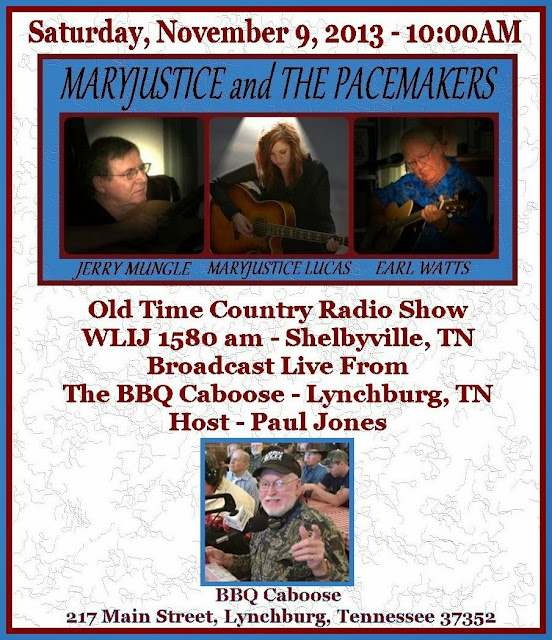 A few months ago Jerry and Earl, who are sometimes billed as Two Old Men and Some Songs invited MaryJustice to join them in a show. Jerry decided to hold a contest on facebook to "name the show". Jerry originally called the event "Two Old Men and A Little Lady." There were several contest entries, but fellow songwriter Larry Cole submitted the title "MaryJustice and The Pacemakers." The title won hands down with one contestant voting against his own entry! After seeing the three very diverse performers, they were invited by radio host, Paul Jones to perform on his live radio broadcast at the BBQ Caboose. So, if you are anywhere near the area, I recommend you drop in for the show.  It's a fun show with Paul interviewing his guests between songs. The BBQ Caboose serves up so great, yes you guessed it ... barbecue. If you can't join the show tune in to WLIJ 1580am serving Shelbyville, TN and surrounding areas, to include parts of North Alabama! You will not be disappointed.
at 12:17 AM