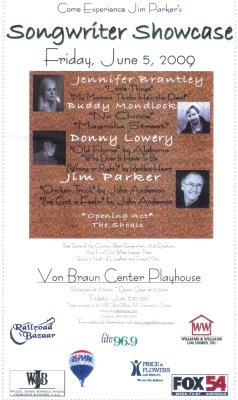 (Click picture for full view)
These are terrific shows in a relaxed, cozy atmosphere in the VBC Playhouse. You get to interact with the singer/songwriters, order beverages and food. There is no better entertainment and atmosphere anywhere at this price!
at 10:13 AM No comments:

Come early to get your coffee, snack and table and get ready for the opening of the show, hosted by Randy Duck, HPD Lieutenant, retired, who enjoys his retirement singing, witing and producing music. 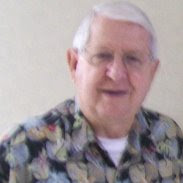 The title song "America's Child," and "The American Way," were written by George Wells. "FireFighter" was co-written by Wells and Duck. This evening of music is to honor those who serve and is a memorial to those officers from HPD and surrounding areas that have been killed in the line of duty. Local officers will be recognized for their service not only to Huntsville Police and Fire Departments, but also for serving overseas in the current conflict.

Recently, Randy was a guest on the radio show, "Those Who Serve" which airs Saturdays on Station WQXD, Decatur, Alabama. He and host, Dave Carney talked about the production of the CD, the songs and the mission. 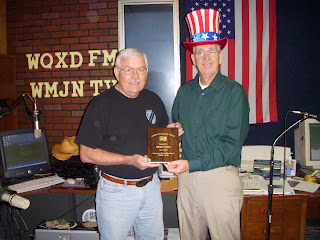 "America's Child" is dedicated to the memory of William Eric Freeman, the young HPD officer slain in the line of duty in 2007, and the sacrifice our officers make everyday - here and in other places around the world.

Fifty percent of all proceeds from the sale of "America's Child" go directly to the Huntsville Police Fallen Officer's Memorial Fund. Anyone interested in purchasing a copy of the CD may contact Randy at randy@randyduck.com.