Our very own Award-Wining, Homegrown Songwriters, MaryJustice Lucas (Madd Talent Artist) and Matt Morrow are joined by Just Hannah of Nashville. Hannah will be accompanied by Jeff Sturms, talented artist who toured with George Strait for 25 years! This a show you will not want to miss! You'll hear originals by our songwriters and favorite hit cover tunes. MaryJustice, Just Hannah and Matt Morrow are all on YouTube and ReverbNation. 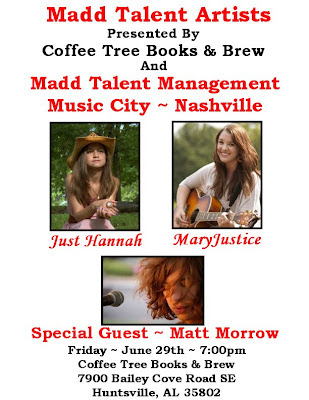 Alex and MaryJustice at Angel's Island

Alex Duggan is not really "a new face in the crowd" of local songwriters. She took time out to go to the University of Alabama in Huntsville where she not only "got" a diploma but a husband, Matt, as well.  Most of you would know her as Alex Hendrix. When you meet Alex you will  know immediately that she is a "go-getter!" 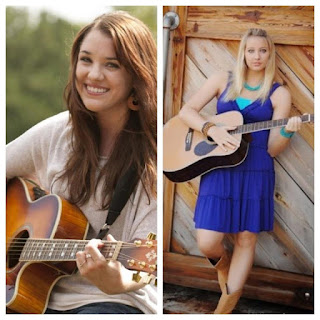 When Alex was ready to start singing again, she asked a friend to recommend a young woman she could do shows with and that nice friend recommended MaryJustice Lucas, who most of you already know. Since both young women "write from the heart" they seemed to speak the same language and hit it off right from the start.


When I asked Alex for a short bio, she said, "I have a difficult time writing bios, because  everything about me is already in a song. I write fondly of where I grew up, and tensely of heartache and love lost. Some things are hidden in metaphors and prose. Others are so blunt that If you listen long enough, you'll know me as well as I know myself." She said her earliest memories are of her father explaining lyrics to her that were beyond her level of comprehension. His favorites were Simon and Garfunkel and John Denver. Alex says those memories contributed to shaping who she is today. Lyrics have held a key part in her life  ...  from the songs she writes, in her painting inspirations, and to her "let it be" wrist tattoo. 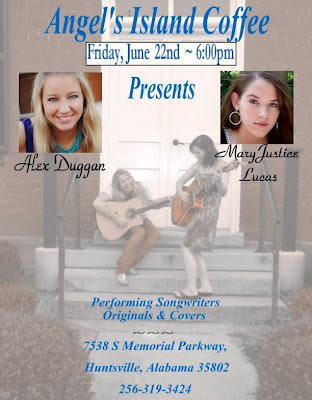 Friday, June 22nd ~ 6:00pm - 8:00pm
So come on out to Angel's Island Coffee, 7538 South Memorial Parkway, Huntsville, Alabama,  and hear these two young, talented performing songwriters serenade you with their originals and a variety of cover songs they enjoy singing. I think you'll enjoy this new collaboration!
at 12:40 AM No comments:

Come join MaryJustice and Matt as they entertain at the Historic Somerville Courthouse for the Somerville Summer Concert Series.

Come hear them cover some great hits they have "made their own"! Both are multiple award winning entertainers. You won't want to miss this show! Bring you lawn chairs, a picnic if you choose.
Hot dogs will be available!
Family friendly entertainment!

The Historic Somerville Courthouse is the oldest original courthouse in Alabama. It was constructed in 1837, built with special taxes that were levied by the Alabama Legislature. Court proceedings took place there until the county seat was moved to Decatur in 1891. Later that year, the courthouse became the Morgan County College, a Presbyterian training school. More recently, the courthouse has served as a senior citizens center and has become a focal point for community events. The two-story federal style building has undergone extensive restoration throughout the years, but still has most of its original architectural features. 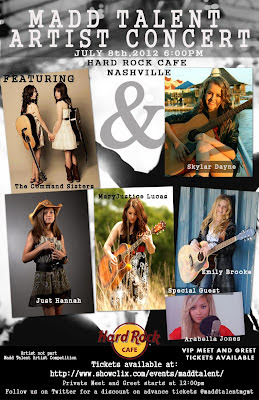